The land of a thousand islands, Croatia’s azure blue Adriatic waters are home to a string of island archipelagos. Some of those thousand islands are just big enough for a lighthouse. Croatia has a variety of island lighthouse rentals, and needless to say, all with stunning sea views. You can choose a lighthouse near a tourist resort, or one miles out to sea, away from the hustle and bustle, with just you, the sea and nature.

A true way to get away from it all is to stay on a lighthouse on a rock, such as at Lighthouse Grebeni near Dubrovnik. You can immerse yourself in the basic elements of nature, enjoying striking scenery and sea views, the singing of the seagulls and a feeling of total seclusion.

Grebeni was built in 1872 and the lighthouse is automated. The stone residence sleeps seven guests and has two large terraces, great for sunbathing or barbecues. You can also arrange diving trips in the area with Blue Planet Diving which is based at the nearby Hotel Dubrovnik Palace.

In northern Croatia, Porer lighthouse is on the tiny Porer islet, a flat circular rock 2.5km from the Istrian peninsula. The 35m-high lighthouse was built in 1833 and the stone building at its base contains two four-bed apartments. Swimming is possible from the islet and the shallow areas are also popular with divers and for fishing.

If you’re staying here, take a trip to the nearby island of Unije, which has beautiful bay, or to the lovely port town of Pula. The nature site Cape of Kamenjak is also worth a visit, with hundreds of species of flora including orchids. Accommodation on Porer costs from €17.25 per person per day. It is reached by boat from Permantura (€100 per apartment) and takes around half an hour.

A stay on the island of Sušac in southern Croatia, surrounded by the open sea, really gives the feeling of being away from the rest of the world. It is 13 nautical miles west of the island of Lastovo and 23nm south of Hvar.

The lighthouse was built in 1878 high up on the island’s steep cliffs, giving it spectacular sea views for miles in all directions. There are walking trails and swimming bays and divers will be interested in the sea water lake in the cliffs and reached from the sea by diving through a cave. A number of significant archeological artefacts have been found on the island and there are plenty of birds and animals.

Accommodation on Sušac costs from €14.25 per person per day and return transfers (taking 1 hour 45 min), cost €400 per apartment. The two ground-floor apartments each sleep four people. Guests need to bring their own provisions, however meal preparation and local fish supplies can be arranged with the lighthouse keeper.

Sv Ivan lighthouse is on an islet which is part of a small archipelago in front of the town of Rovinj. Shallow waters make it ideal for families and children and the 75ft-high lighthouse tower has great views. Swimming, fishing and diving are popular activities and the area is often visited by dolphins.

There are two apartments on the island, costing from €19.75 per person per day. Transfer from Rovinj (€100 per apartment) takes 30 to 45 minutes.

Further out to sea is Palagruža lighthouse on PalagružaIsland. Built in 1875, it is the
largest lighthouse on the Adriatic Sea. Set between the Italian and Croatian coasts, Palagruža is 68 nautical miles south of Split and 26nm south of the island of Lastovo, making it the furtherest out ot se of all Croatia’s islands.

Palagruža has a lighthouse keeper and two apartments, each accommodating four guests. The island is covered in Mediterranean vegetation and is a beautiful nature reserve. There’s also an archaeological site.

Walking trails lead to beaches and for divers, there are caves, rare fish and even a steamboat wreck nearby. You can also visit other islets in the area. The Adriatic is a rich fishing area and a lovely experience is to join local fishermen in the early morning as they retrieve their nets.

PalagružaIsland is two hours by boat from KorculaIsland (Korcula is served by ferry from Split). The apartments cost from €12.46 per person per day and return boat transfers cost around €700 per apartment. Due to its remote location, guests should bring their own provisions. 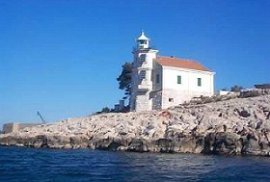 Further north along the coast, Prisnjak islet is just 300m from the island of Murter. Built in 1886, the lighthouse is now fully automated. The islet is one of the most picturesque in the Murter archipelago, at the ‘gate’ to the larger Kornati archipelago.

Visiting bathers and boaters from nearby Murter Island make the island less tranquil than some of the others, however it’s a picturesque island with pine forests, stone walls and beaches and the clear waters are abundant with fish. Prisnjak is also near KornatiNational Park which is worth a visit. The apartment sleeps four, costing from €22.42 per person per day. Transfer from Murter takes around 25 minutes (€60 return).

For information on other lighthouse rentals including Sušac, Palagruža, Grebeni, Prisnjak, Porer and Sv Ivan, see adriatica.net, tel: +385 (0)1 2415 619, info@adriatica.net. Most of the lighthouses are available to rent on a weekly basis however two-day rentals are possible for Sv Ivan and Porer, and on Prisnjak from September to June. All of the above lighthouses (except Prisnjak) have lighthouse keepers. Guests should bring all provisions. Local fish and meal preparation can be arranged with some lighthouse keepers.

© Yvonne Gordon is an award-winning travel writer. This feature was first published in Private Islands Magazine, Canada. Prices were correct at the time of going to print but may have changed since then. Read Yvonne’s feature about staying at Lighthouse Grebeni Let There Be Light, published The Irish Times. For other travel features and books, see the Travel page of http://www.yvonnegordon.com

Tweets by @Holsonthewater
Follow HOLIDAYS ON THE WATER on WordPress.com